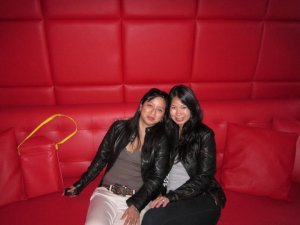 The idea for Alpha Girl Comics was born during a late night discussion over glasses of red wine between two friends Amy Chu and Georgia Lee back in 2010. Lamenting a distinct lack of female voices in this medium they decided to take action and start publishing their own stories.

In 2011 after taking an online introductory class on writing comics, Amy Chu decided to learn all she could about making comics. Her work appears most recently in DC Sensation Comics Featuring Wonder Woman, Image Comics CBLDF Liberty Annual and the DC Comics/Vertigo anthology CMYK. Amy is a frequent guest and panel speaker at comic cons all over the country.

She has helped in the start up of several businesses ranging from media to biotech, including A. Magazine where she served as the founding publisher.  Amy is a graduate of the Harvard Business School, with a degree in Architectural Design from the Massachusetts Institute of Technology and a degree in East Asian Studies at Wellesley College.

Georgia Lee is an award-winning filmmaker and TV writer. She is currently working on the new SyFy series The Expanse. She has created and written pilots for CBS, NBC and FOX.  Georgia’s first feature film “Red Doors”, which she wrote, directed and co-produced, won the Best Narrative Award at the Tribeca Film Festival.  Georgia is a graduate of Harvard Business School and Harvard University.